1. Woe (sorrow;  misery) to all Israelites who go-down (fall; are brought down; descend) into Egypt (Mormonism’s slave-culture) hoping for help (guidance; assistance; aid; support; succor). They begin to rely on horses (Melchizedek High-priests who are “leaping-for-joy”) and they begin to place their confidence in chariots (three-man teams of Melchizedek high-priests acting on behalf of Salt Lake’s authority; Mormon bishoprics) […]

1. Woe (sorrow;  misery) to all Israelites who go-down (fall; are brought down; descend) into Egypt (Mormonism’s slave-culture) hoping for help (guidance; assistance; aid; support; succor). They begin to rely on horses (Melchizedek High-priests who are “leaping-for-joy”) and they begin to place their confidence in chariots (three-man teams of Melchizedek high-priests acting on behalf of Salt Lake’s authority; Mormon bishoprics) because of their greater number and rank.   These men set-themselves-apart (identify themselves; distinguish-themselves)  by the sheer force (weight; strength; impact) of their reputation (name; status; prestige), but they all refuse to look-upon (acknowledge) the “Holiness” of Israel,   but rather, they have-in-mind (imagine) God (Jehovah) as a deity (“Supreme-Being”) who requires “absolutely-nothing” of them.

2. But instead, they maintain (advocate; insist; emphasize; claim; assert) that they are wise (intelligent; skillful; experienced; sagacious; shrewd; artful) and can bring (cause) evil (sadness of mind; malice; evil-conditions) and have in mind (dwell on; focus their 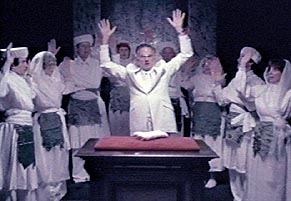 attention on) the words of men instead of the words of God (Jehovah). You must point (direct everyone’s attention) to these thorns (rigid-thinking, hurtful, annoying Melchizedek priesthood appointees) who are rapidly springing-up throughout the Church Of Jesus Christ Of Latter-Day-Saints. They rise (advance; prosper; progress in business) because of (on account of) a house (family; bloodline; dynasty; lineage) of very wicked men and especially thanks-to (because of; on account of) surrounding (protecting; safeguarding) prophets,seers and revelators,  who  ordain (officially-establish; officially-prescribe; officially-enjoin) “works” (religious-practices; religious-rituals) of evil (profound-wickedness). 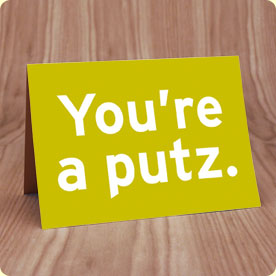 who are “leaping-around for joy”) is nothing but flesh  (“a Prick”; a worthless asshole; an annoying and obnoxious man who escalates his annoying and obnoxious behavior the more he is ignored; a “potz”; a “shmok”;  a “Dick”, i.e. from a “Dick’s point of view”… (the world’s greatest manifestation of manly power and potency”) * except without any of that “pesky” (annoying; messy; troublesome) spiritual component.

4. Indeed (if truth be told) “Thus saith the Lord” unto me, “Take refuge in the Ariah (“Light of Jehovah”; ar meaning: illumination-of; “lightning-of”

& “Yah” which is the short form, i.e. nickname for Jehovah) and point (direct everyone attention) to providing shelter (cover;  expiation; atonement)  for newly plucked (recently-converted; recently-baptized; recently captured) generation of leaves (new-growth) to Israel’s family tree (bloodline; lineage pedigree; dynasty). You (Israel’s people; rank and file Mormons) are being convened (invited; summoned; called; proclaimed; chosen) to combat the work that is underway by this generation of Salt Lake’s Melchizedek Priesthood Organization to establish (achieve permanent acceptance or recognition for) Salt Lake’s false-shepherds (prophets and apostles)  just because of their calling (inner impulse toward a particular course of action, accompanied by conviction of divine influence).

Don’t associate yourselves (become a member of; get mixed-up with)  Salt Lake’s organization or those pointing (directing everyone’s attention) to their kind (sort; type) of priests. They refuse to pay attention,  so (consequently), The Lord of Hosts has come-down (condescended; waived the privileges of rank) in order to mass (muster; assemble) His army for the sake of Mt. (abbr. for “the administration of”; “organization-of”) Zion (Israelite’s who’ve wandered for 40+ years in a  personal wilderness searching for Jehovah) and against Mormonism’s regional and local “Princes-Of-Authority”……..

5. ……who are bent to the will of (subjugated to; true-believers of ;subordinated to)  Salt Lake’s “chirps” (attempts to woo; mockery; insults; verbal-abuses; attacks)   So……….. the Lord of Hosts is surrounding (enfolding; embrace; encompassing; girding;  enclosing) Jerusalem

(“teaching of Peace and Salvation”)  as a means to protect the works of this generation of Israel’s people  while pointing (directing everyone’s attention) to  yet-another (a second, and much greater;  worldwide)  “PASSOVER” (temporary suspension of Salt Lake’s curse; emancipation of Israelites from slavery in Egypt, i.e. Mormonism’s culture of slavery.)  while  pointing (directing everyone’s attention) toward deliverance (rescue; escape as if by slipping-away (miraculous means).

6. They (Israel’s people) are returning (coming home; rebounding; coming back),  so that

7.  Indeed (if truth be told), during our Day (generation; era) Israelite (rank and file Mormon) men will begin to

8. Assyria (“The notion of guaranteed social popularity and financial security thru unwavering allegiance to Salt Lake’s Melchizedek Priesthood Organization”) will fall (collapse) by the “Sword” (penetrating “power-of-truth”). Nobody should (has to;  needs

9. And  Salt Lake’s stronghold depends on presiding Melchizedek authorities who’ve turned aside from the “Right-Way”. They are transitioning (changing from one condition to another; converting; transforming; morphing) Israel’s people (rank and file Mormons) so they can lay hold

of (gain control of;  take-away) every Israelite standard (rule or principle used as a basis for judgment) in order to “Lord-Over” (preside-over; control) the overthrow (illegal and overt seizure)  of this generation. The Lord declares all this in order to prosper light (enlightenment revelations; the sacred-lot) for the sake of Israel’s people in Zion and General Authorities hassling (pestering; nagging; hassling; harassing; badgering; troubling; annoying; hounding)  their people with regard to Jerusalem (“Teachings of Peace and Salvation”).