A Prophecy Against Egypt And Cush

According to the BOOK OF MORMON, (Mormonism’s primary volume of canon-law),  a “Secret-Combination” is defined as two or more conspirators who plot together to initiate and carry out “works-of-darkness” (immoral and illegal activities; crimes) in order to harm or defraud others.

Secret combinations have existed since the days of Cain (Moses 5:51). Satan endorses (approves; exploits; supports; upholds) them  (2 Ne. 26:22) and the men who instigate and implement them.

Members of secret combinations are motivated by a-lust (an appetite) for power, sex or a passion for social or financial advantage. (Ether 8:15, 25)

Conspiracy  (scheming; plotting; collusion)  is just the “modus-operendi” (“business-plan”: methods of operation; “means to an end”) that they’ve selected to satisfy theirdesire.

Historically, secret combinations have  been found among brotherhoods (fellowships; fraternities)  of priests, politicians, celebrities, and government-officials. They operate in ” secrecy” to hide their corrupt (immoral) activities from public scrutiny.

The foremost conspirators in Salt Lake’s Secret Combination are willing to defile, defraud, murder, deceive, in order to supplant God’s government.  Their goal is

to (1) seize power for themselves,

(3) take unlawful possession of Israel’s birthright (inheritance) by stealing their identity, robbing them of freedom, creating  social-paralysis among them, and finally, relegating (consigning; banishing) them to the “Trash-Bin” of history.

Salt Lake’s top-leaders (General Authorities; prophets and apostles) have combined their individual resources (skills in sorcery) to organize a “Secret-Combination” (stealthy-stratagem;  clever-conspiracy) to bring-down (subjugate) Israel’s people, because every one of Sale Lake’s presiding General Authorities is a Cushite (man lacking a moral conscience).  They work with like-minded Mormon priesthood authorities,  but they’re also in league with heathen (unbelieving; pagan) associates.

rebrobates and collaborate with the thieves of this world to realize it.

The  “social-popularity and financial-security” (Assyrian success) they enjoy as Salt Lake’s “Brethren” (General-Authorities) is wholly dependent upon (determined by conditions and circumstances of) servitude (slavery) and oppression of Israel’s people (rank and file Mormons).

1. During the night (under cover of darkness; by means clandestine efforts),

“Sargon” (“Our Kingship is Legitimate”) is the “Mantra”  (“awe-inspiring group of words believed to have psychological and/or spiritual powers”) That Salt Lake Headquarters uses to secure (firmly-cement; anchor; guarantee) the supreme-rule of Assyria (“Guaranteed social popularity and financial success”). But, tragically,  the “Sargon-Mantra” (“a false claim of legitimacy”) has infiltrated (penetrated; invaded; “wormed-its-way-into”) the hearts and minds of Israel’s People (rank and file Mormons),  worldwide.

First,  Israel’s People tolerate the “Our Kingship Is Legitimate Mantra”, next, they accepted the

2. During this period (phase) of time (history), Jehovah is speaking (talking) to Israel ‘s people (rank and file Mormons) through the medium of the Isaiah’s Book.

As a legitimate prophet, Isaiah has sufficient insight and courage.” to say to Israel’s people, “Come on! (said when encouraging Israel’s people hurry up or when one feels that Israel’s people are foolish) … …Remove (take off; get rid of) that “sackcloth” (“habit of slavery”) with which Salt Lake has clothed your loins (“seat of strength, potency”,virility, courage, manliness, and power) then “undo (unfasten; untie; loose) the sandals* (“symbols of security in  Mormonism’s life-style”) with which Salt Lake’s representatives have shod your feet.

Literally , Isaiah  did just what he’s telling you to do, by removing his sackcloth (habit of slavery) and walking barefoot (“in submission to God”; “in utter vulverability”).

* Sandals –  What was the normal dress for Jews in ancient days with regard to shoes? If the removal of the shoe denotes a loss of dignity, if the shoe serves as a symbol of transfer of property, if the shoe is not to be worn in certain places – then it seems that the shoe was both a symbol of social-dignity (social-excellence; social-nobility) and at the same time was associated with dust and thus unfit for holy places and holy activity. The dress of biblical man has been described: We may say that there were two main garments, an outer garment, the mantle, simlah in Hebrew, and an inner garment, the tunic, kuttonet . . . . If to these two we add the ezor, a broad girdle worn beneath the tunic, and the hagor, a belt worn outside of it, and if we picture sandals of wood or leather tied to the feet with thongs, we have the complete attire of ordinary men. On shoes in particular: Sandals apparently were worn in Palestine from the earliest times . . . though ordinary persons are generally represented as barefoot . . . . Shoes were also of symbolic social-significance, as may be seen from the legal practice of presenting the shoe to confirm publicly the renunciation of levirate marriage rights or obligations . . . (Deut. 25:9; Ruth 4:7). To have one’s feet unshod (without shoes), was to be dispossessed . . . . JACOB CHINITZ Jewish Bible Quarterly.

Referring to Israel’s the 40-year-long wandering in the  wilderness, Jehovah declared,  “During the forty years that I led you through the desert, your clothes did not wear out, nor did the sandals on your feet.”
Henceforth footwear and bare feet took on major symbolic significance in the Jewish religion. These are seen in the Torah, (Law of Moses) and the Shulchan Aruch, 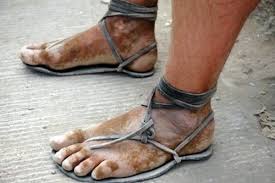 (Code of Jewish law) which was written in the 16th century. The everyday event was to be seen as something to worship the glory of God including putting on sandals. The Jewish laws prescribed the order in which you put them on. The right went on first followed by the left. (Shulchan Aruch/Orach Chaim 2:4). The left shoe was to be tied first and the whole process reversed when taking the shoes off (Shulchan Aruch/Orach Chaim 2:5).

It is thought this custom was based on the belief the right side was more important than the left and subsequently the right foot should not remain uncovered while the left was covered. Shoes were tied from the left because knotted teffilin was worn on the left arm. This refers to the children of Israel being out of Egypt as an act of God. When walking outdoors, Jews were required to cover the entire body including their feet (Shulchan Aruch/Orach Chaim 2:6). By the end of the first century BCE,  shoes were considered an item of sensuousness, comfort, luxury, and pleasure. Rabbi Akiva (ca.50–ca.135 BCE) instructed his son Joshua not to go barefoot.

Now, this was the custom in former times in Israel concerning the redemption and the exchange of land to confirm any matter: a man removed his sandal and gave it to another, and this was the manner of attestation in Israel. (Ruth 4:7 NASB)

According to the custom of the day, before Boaz could legally marry Ruth he needed to get a release from a nearer related kinsman, known as a “guardian-redeemer”or “kinsman-redeemer” (Ruth 3:12-13). Even after this unnamed man decided that it was not financially viable for him to redeem Ruth (Ruth 4:1-6), to make the process legal, Boaz needed to seal the deal with a strange ritual. In a tradition that is perhaps comparable to the modern spit handshake or pinky swear, a shoe was removed and exchanged to ratify the agreement (Ruth 4:7-8). Old Testament covenants are often sealed with some kind of footwear deal, and there is a good reason for this. Without shoes, we are powerless. We are humbled. We are weak and incapable. We cannot go on. A soldier cannot fight without his boots, a farmer cannot plow his field, a traveler will not get very far…  God reminds the Israelites that their clothes – and their sandals – never wore out as they wandered for those 40 years in the desert, and this is a most remarkable and important provision.

By removing a shoe in the ancient Middle East, a person can be seen to be offering vulnerability – putting themselves at the mercy of the recipient. It is a statement of trust and submission.

3. Then the Lord said, “Just as my servant, Isaiah, walked stripped of his sackcloth (freed from

the habit of servitude) and   barefoot (offering vulnerability to God; a statement of trust and submission to God) for three  years.

This controversial public  display (demonstration; example) served as “an-omen” (a warning; a portent; a harbinger; “handwriting on the wall”) concerning things to come for Egypt (Mormonism and its Culture of slavery)  and for Cush (The  ruthless “Brethren” of Salt Lake City, who have absolutely no consciences).

5. Everything that proceeds from Cushites (men without consciences ) degrades, pollutes, and

Egyptian (Mormon) task-masters (slave-drivers) do not engage in anything of eternal significance………they simply enjoy the pompous sound of their own voices.

everyone’s  attention) to the blessedness (successfulness; social-popularity) associated with Mormon leadership,  then thought to themselves…

Because Melchizedek priesthood leaders vociferously claim to be Jehovah’s chosen servants,  Israelites (rank and file Mormons) are convinced (sure; confident) that Salt Lake’s imposters (deceivers; pretenders) will somehow deliver (emancipate; rescue; save) them from the evil purposes of Assyria’s wicked kings (rulers; monarchs; crowned-heads; princes), but Israel’s people haven’t a clue as to  what the name Assyria means nor are they able to discern (perceive or recognize)  an Assyrian when they see one.

How do you suppose that we (our generation of Israel’s people; rank and file Mormons) can ever hope to escape?